The perfectly timed beats of Al Mills and Nnamdi Chukwuocha, who perform together as the Twin Poets, captured the hearts and minds of the ISC audience last February.

Mills and Chukwuocha showcased their original spoken-word poetry during a wildly popular set for our Storytelling Online! virtual concert series. We recently caught up with the identical twins to talk more about their fascinating work, which bridges the arts, social work, community activism, and politics.

Mills and Chukwuocha live and work in Wilmington, Delaware, the small city where they were raised. Wilmington has long struggled with poverty, with more than a quarter of residents living below the poverty line. (That’s more than twice the national average.) The trouble that plagues the Black community, which makes up more than half of the town’s residents, is the frequent subject of the Twin Poets’ work. They often delve into hard subjects like gun violence, substance abuse, and broken families, both to remember the people they’ve lost and as a lifeline to those who haven’t been lost yet.

“A lot of our poetry, our service, and our social work deals with the trauma that’s enacted on our community,” says Chukwuocha. “We come from a family that’s very engaged in community service. Our parents taught us that our family went beyond our front door. Everyone was a part of our family, and we looked to solve their problems like they were our own.” 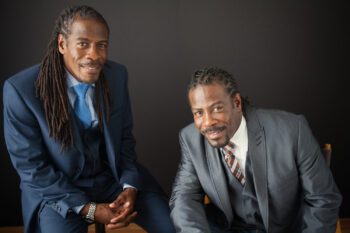 Working for the people of Wilmington for the last 30 years, the Twin Poets have worn many hats. Both men are politicians (for the state legislature and the city council, respectively) and social workers, organizing services and support for local kids and their families. They’re also performing artists who have served as the Poets Laureate for the State of Delaware since 2015. Their poetry blurs the lines between entertainment, education, and counseling, and they use it regularly in poetry-based workshops and therapy groups for at-risk youth. Their anger management and conflict-resolution class, for example, teaches kids to use poetry as a tool to calm down and express themselves in a safe, productive way.

These were lessons the Twins themselves learned long before they were professionals, as kids nurtured by a family that valued poetry, music, and the arts. “Our poems were being listened to at a very young age at our household,” says Mills. “We were always encouraged to write, and they would listen like we were the greatest writers ever. We learned early on that our words could change things.”

As adults, the brothers have worked hard to pass along those values to their community, teaching kids how to harness the power of the arts to cultivate resilience, determine their own futures, and work towards their dreams. In the country’s second-smallest state, in a town where everyone knows everyone else, Mills and Chukwuocha see the impact of their efforts every day.

Performing for a paying audience like ours at the International Storytelling Center, the Twin Poets share many of the same spoken-word pieces that they use in their day jobs. To them, it feels like part of the same project: finding voices for the voiceless.

“If we don’t talk about the kids in our neighborhood dying, nobody else is going to speak about it other than the family,” Mills says. “It’s like it wasn’t important. It wasn’t on the front page of the newspaper, that this kid just died. We feel like it’s our responsibility to take our community’s sadness and then put it in words.”

“It has never felt like work,” Chukwuocha adds. “This is truly who we are. This is what we were meant to do. If we weren’t here advocating for these communities and families and individuals, both as artists and as social workers, then no one would be. So it’s vital to us and our roles are essential to our community and the growth and development of individuals and families that we serve.”

In conversation, the brothers sound very much alike, riffing off one another’s ideas in a loose echo of their more carefully timed stage work. Their writing process is so collaborative that it’s sometimes difficult to distinguish who wrote what.

“He may have a piece that I love it so much, it becomes mine,” Chukwuocha says. “We just merge.” On stage, they speak together and alone, for themselves and for everyone.