At the National Cowboy Poetry Gathering in Elko, Nevada, in a crowd thick with dusty old ranch hands and working buckaroos, a tiny two-year-old became an unlikely star.

Now a young woman of 21, cowboy poet and singer-songwriter Brigid Reedy will be featured as a New Voice at the National Storytelling Festival, October 7-9.

Reedy has spent her life immersed in the landscape, poetry, and music of southwest Montana, where she still lives. Raised on a ranch, she learned to yodel from her father, who was the one who took her to Elko. She had picked up the fiddle by the time she was five years old, and started writing poetry just a few years later.

“I just wanted to do anything that my daddy was doing,” Reedy says. “He has a beautiful singing voice, so I caught on pretty quick.” 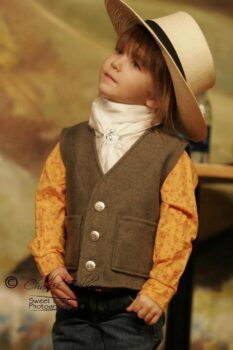 Today, Reedy plays the fiddle and the banjo, harmonizing on old cowboy tunes and original music with her brother Johnny, a gifted guitar player who will perform with her in Jonesborough.

“At the tender age of 16, he is an absolute genius,” Reedy says. “He plays more chords than there are.”

Rooming together with their parents in a two-room bunkhouse, the Reedy siblings wrote poetry at the kitchen table and sat on their beds to make music. Guitars, fiddles, and banjos lined the walls. “Every time we laughed, we could hear it ring in all the instruments,” Reedy recalls. “It was a very musical household.”

During her annual trips to Elko, Reedy forged unlikely friendships with cowboys who were often more than 70 years her senior. “I’ve always been very drawn to older people with something to say,” says Reedy, who now spends her spare time apprenticing with the master saddle maker and raconteur George Holt. “It was really special because it was very much a scene and an artistic happening. It was a nexus of cowboy culture and art, and all of the really active writers and poets and musicians gathered there. It was just one weekend a year, but it shaped a lot of my identity.” She counts National Storytelling Festival alum Waddie Mitchell (who co-founded the Elko Gathering) as an early influence and a valued friend.

As a child, Reedy thought of her pen pal Glenn Ohrlin, a cowboy who was 82 when they first met, as her best friend. A social person who’s always seeking authentic connections, Reedy never thought of ranch life as isolated. She describes the ranching community in Montana as a sprawling place with a small-town feeling. On the rare occasion you encounter someone you don’t know, you can still swap stories about the folks you have in common.

“It’s a very storytelling-based culture of communication,” she says. “You hear stories about people, and can see how they shift from teller to teller. We keep alive the past generations and their experiences of this place.”

At the National Storytelling Festival in Jonesborough, Reedy expects to share a wide range of songs, poems, and stories that share the flavor of Western Montana. In addition to their original music, Reedy and her brother, whose tastes are wide ranging, play jazz from the 1920s and ’30s, blues, and Western swing, a musical genre with a history that is a fascinating story in itself.

“Eight years ago, rural musicians were exposed to the popular music of the age, which was jazz,” Reedy says. “They were picking that up, and then playing for dancers with guitars and fiddles and banjos, and they created this whole genre of Western swing.” She and her brother write their original compositions in a similar way, filtering traditional musical forms through a contemporary lens. 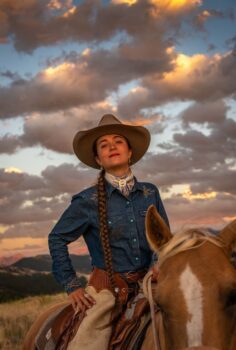 Though she is enormously busy, Reedy radiates a remarkable calm and depth. In addition to her saddle-making apprenticeship and her performance career, she is a full-time college student. She studies English literature and natural horsemanship, riding her own horse for college credit. In many ways, it’s a straightforward continuation of how she has spent her time since birth. Reedy’s first memory is of riding horseback with her dad.

“Everything in my life—music, horses, art, poems, and stories—feels very connected and seamless,” she says. “They mutually inform and inspire each other. As an English major, I’m reading literature from the past 700 years, and that’s informing my work. I go out and ride my horse through the mountains, working cattle and pushing horses, and that informs my work. Performing, seeing the world, meeting people, all of those things are connected in my artistic life. I can’t wait to share that when I come to Tennessee.”