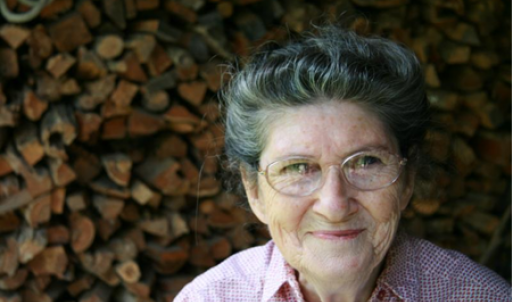 The storytelling world has suffered two great losses recently. Rosa Hicks passed away on January 31, two weeks to the day after her youngest son, Ted Hicks left this world.  Rosa’s funeral will be on Tuesday, February 4, 2014 with visitation at the Hampton Funeral Home in Boone, NC, at 1:00 pm followed by a service at 2:00 pm. Then Rosa will be buried in the family cemetery between the graves of Ray and Ted. If the weather holds, there will be a celebration of Rosa’s life. If you can come, bring stories, pot luck food to share and instruments. And we can comfort the family and each other.

Over the years,many from across the world made a pilgrimage to the Hicks homeplace on Beech Mountain to hear Ray tell on the front porch or be welcomed into the front room, warmed by stories and the pot-bellied wood stove. As Ray wove the magic of Jack’s adventures, Rosa was always close by, listening with us, tending to Ray or slipping out to the gardens to mind her dahlias. With all the chores she had to do, she always made time for her flowers.  Rosa Harmon Hicks knew that beauty is as necessary as cornbread.

And on the day of Ted’s funeral, cold and blustery, a line of cars crawled up the slippery slopes of Beech Mountain.  In the lead was the hearse carrying Ted’s body dressed in a flannel shirt and bib overalls.

After the preacher read some Bible verses, he asked if anyone wanted to speak.  I talked about the legacy of the Hicks family – and Ted’s bright, generous spirit. Joseph Sobol said, “Ted sat quietly as long as his father was in the house, and it wasn’t till after Ray was gone that it dawned on us that he’d listened with a craftsman’s ear and an artist’s heart to every word of every story, and that he knew them all from the inside out. Even as his body failed him, he spent the last ten years telling those stories to anybody who would listen, not for his own glory, but for that of the ancestors.”

Then Vixi Jil Glenn started in on a tale, telling how “Jack once put ‘Death’ in a sack and hung him high on a tree.  Jack thought he was helping folks out, but after years of no death on earth many old folks, and young ones too said they were tired and ready to go. And when Jack finally let ‘Death’ out of the sack, Jack was the first to go.”

And in that moment, we all saw Ted being swooped away by ‘Death’ – and being relieved of his tired suffering body. That image is still a comfort for my heavy heart.

Leonard, Ted’s brother, told me at the funeral home, “Some woman called here this morning and asked if Ted was going to be buried on the home place. I said to her, ‘Ted IS the home place.’

Please hold all the Hicks family and all of us that love them in your hearts as we travel once again in the funeral procession to say goodbye to our dear Rosa.

The family is accepting donations to help with the expenses of both funerals. Checks can be made out to “the Ray and Rosa Hicks Fund” c/o Connie Regan-Blake, PO Box 2898, Asheville, NC 28802.