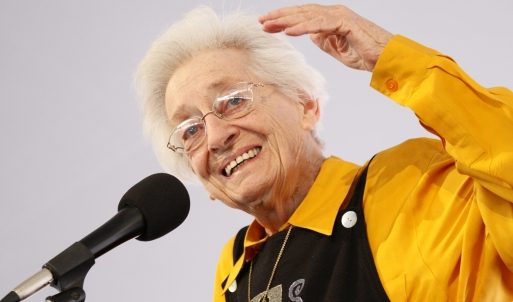 The storytelling community has lost one of its most well-known and beloved storytellers, Kathryn Tucker Windham.  Master storyteller, author of 24 books, playwright, accomplished photographer, popular public television and radio personality, and trail-blazing journalist, Windham passed away on June 12, 2011 at the age of 93.

A regular contributor to National Public Radio’s All Things Considered, Windham’s appearances won her national acclaim.  Click here to listen to some of those commentaries.

Windham was also the recipient of the prestigious Alabama Humanities Award and the Storytelling Circle of Excellence and Lifetime Achievement awards.

“We have lost the matriarch of American storytelling,” said Jimmy Neil Smith, founder and president of the International Storytelling Center.  “Kathryn’s stories gave us inspiration, guidance, and hope for our life’s journey. The impact she had on all who heard her stories was profound.  She will truly be missed at the National Storytelling Festival, in the storytelling community, and in the lives of all of us who were fortunate enough to know her.”

Memorials may be made to Selma-Dallas County Public Library or Tale Tellin’ Festival. Click here for more information.