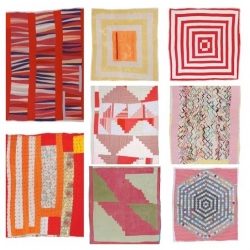 Every year, months before the first weekend in October, volunteers begin cutting some 14,000 fabric swatches that will serve as tickets at the National Storytelling Festival. A few years ago we were lucky enough to have some of our enterprising friends, the Harry Norris family, transform a collection of those old swatches into the beautiful quilt that hangs in the International Storytelling Center.

Finding a new purpose for old fabric has long been an important part of the quilting tradition, a practice that transformed sheer necessity (due to the scarcity of materials) into high art. It’s a familiar technique to the women of Gee’s Bend, Alabama—perhaps the most famous community of quilters in the world.

In addition to scraps leftover from other projects, the Gee’s Bend quilters worked pieces of old work clothes into their quilts. It was a way to conserve resources, but sometimes it also served the purpose of memorializing people in the community who had passed.

Gee’s Bend, for the uninitiated, is a tiny African-American community on the Alabama River that has remained almost completely insulated from the outside world since their enslaved ancestors, who worked the land when it was a plantation, became free men and women. Their stunning hand-stitched quilts have since rightfully become iconic pieces of American folk art.

The Gee’s Bend quilters first skyrocketed to fame after they were discovered by the art world around the turn of the century, an event that resulted in a prestigious traveling exhibit and images of their quilts being featured on stamps sold by the U.S. Postal Service.

Decades before a New York Times art critic called the “eye-poppingly gorgeous” quilts “the most ebullient exhibition of the New York art season,” storytelling’s own Kathryn Tucker Windham was reporting on the unusual and historically significant 700-person community, which is situated not far from her home was in Selma, Alabama.

In 1982, Kathryn visited Gee’s Bend for the first time on behalf of the Birmingham Public Library (where she then worked)—a trip that resulted in interviews that she wove into her long report.

The storyteller stayed in touch long after the project was over, developing strong friendships with many people in the community. In conversation with an ISC employee, Mary Margaret Pettway of Gee’s Bend recently recalled that Kathryn was “one of us.”

The Festival is excited to welcome the quilters from Gee’s Bend for these special intimate and informal hour-long conversations.  You’ll hear about their community, their quilting tradition and their personal experiences – a rare opportunity to hear the unique story of Gee’s Bend, authentically told.

The Gee’s Bend Quilters will perform three times over the course of the Festival: on Friday, October 6, at 4:00 p.m., and on Saturday, October 7, at 10:00 a.m. and 11:30 a.m. All performances will be held in Mary B. Martin Storytelling Hall. Tickets are just $20, and reservations are strongly recommended.

——-
Stories in Motion is a regular feature in which ISC examines the fresh ways we see the power of storytelling at work in the world.