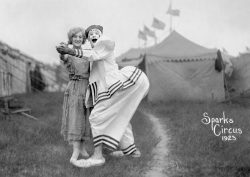 On the surface it may seem as though storytelling and circus have little in common, but in fact the two art forms share a surprising number of similarities. Both are known for taking place under big-top tents, as anyone who’s attended our National Storytelling Festival can attest. But on a deeper level, both storytellers and circus performers embody living cultural traditions—skills and secrets that have been passed down carefully through generations, but also new and emerging forms that are being developed every day.

This year ISC took part in the Smithsonian Folklife Festival in Washington D.C. (Click over to our president’s blog for a more detailed report.) One of the themes the Smithsonian folks explored in depth this year was circus arts, going so far as to erect a big-top tent on the National Mall. It’s striking to think about how, even when art forms feel connected, each has its own history, tradition, and culture. The circus arts exhibits included performances, demonstrations, and workshops, not just with the artists, but also with the people who support them—costume makers, makeup artists, musicians, chefs, directors and choreographers, and other laborers.

What we now think of as the modern form of circus was founded in 1768. It’s a truly international art form that also happens to have an interesting history here in the U.S. Our first president, George Washington, was in the audience of a Philadelphia circus in the late 18th century, which perhaps conveys how varied circus audiences have always been. By the 1830s, the tradition had evolved into a traveling show, bringing excitement, intrigue, and worldliness to the country’s smallest towns; on a parallel course in Europe, circus arts were practiced mostly in more permanent structures. The period from around 1870 through the 1920s is now known as the Golden Age of Circus, and then the art form was a fundamental part of American life, attracting huge crowds from all walks of life—rich and poor, young and old. The circus has always been a way to bring people together, an example of a phenomenon that Michael Atwood Mason, director of the Smithsonian Center for Folklife and Cultural Heritage, aptly describes as “unit[ing] people in a shared activity where they can experience and reflect upon their lives.”

The circus is also a rich builder of its own community. As these huge productions traveled from town to town, mostly on covered wagons, circuses formed their own little self-contained worlds. Many companies had to hire their own service providers like barbers, teachers, doctors, and vets to travel with them. Chefs were hugely important, making nutritious food for people who are essentially world-class athletes. At one point Ringling Brothers staffed more than 100 cooks!

Looking at the different acts and performance styles over the centuries paints an interesting picture of folk life here and abroad. The art of acrobatics dates back to ancient times, but other aspects of circus are much more recent innovations. Clowns have been a part of modern circus from the early years, though they began as humorists whose work was geared towards adults, not children. Trapeze, a French innovation, didn’t come along until around 1850, but it has since become an iconic element of the show. A look at contemporary circus acts demonstrates how some traditions have fallen out of fashion. The Smithsonian’s Folklife Festival, for instance, did not include any exotic animals, to the applause of animal rights enthusiasts. Styles, too, have changed, as is evidenced by the popularity of avant garde forms of circus such as Cirque du Soleil and Cirque des Voix, a company known for working with a live orchestra. The latter performed at the Folklife Festival.

In the heyday of circus, large traveling companies included what were perhaps the most diverse groups of performers across the arts, with a given show featuring entertainers from all over the world. There’s also always been a heavy emphasis on family, with many acts continuing across generations. Circus arts practitioners represent myriad traditions both in and out of the ring, bringing pieces of their cultures with them on the road to share with their colleagues and their audiences. Traveling circuses have always been a melting pot of languages, cultures, and cuisines. At the Folklife Festival alone there were people from all over the world, including the Hebei Golden Eagle Acrobatic Troupe, which features two dozen of China’s top acrobats; UniverSoul Circus, which is a unique celebration of urban pop culture; Rony Gomez from Cuba, who juggles, dances, and performs acrobatics; Olesya Fedotora, a Russian acrobat; Crystal LaCaille, a UniverSoul performer who’s originally from Trinidad and Tobago;
the Bindlestiff Family Circus, which is based in New York City; and Dolly Jacobs, an American aerialist.

Jacobs has spent her entire life among circus folk, including her father, who was known worldwide as the face of the Ringling Brothers and Barnum & Bailey, and her mother, who was a dancer. She was literally raised on a train, not just by her parents, but by the circus community, who taught her to speak Bulgarian, Spanish, Polish, and German.

2017 is in many ways an exciting time in circus, with more and more grassroots organizations and innovative acts springing up across the nation. But at the same time, circus as we know it is undeniably in decline. In May 2017, Ringling Brothers and Barnum & Bailey Circus ended their 146-year run with a final performance on Long Island. Many people consider the business model of large circuses outdated, so smaller troupes are becoming the norm.

Practitioners are also exploring new and interesting applications outside of entertainment (something we pursue in storytelling, too). The Folklife Festival invited an interesting range of circus folks who have found applications for their art form. We were fascinated to learn about Circus Juventas, a nonprofit performing arts youth circus that helps build teamwork skills and self-confidence in kids; Quat Props, an organization that adapts juggling equipment and techniques for people with disabilities; Wise Fool, a group of women activists from New Mexico who promote social justice; the Medical Clown Project, which performs for people who are sick; and Clowns without Borders, a group that brings much-needed laughs to refugee camps, conflict zones, and natural disaster areas around the world.

Is the circus really the greatest show on earth? We’re not sure—we’re still pretty sweet on storytelling. But it’s certainly among the greatest shows on earth, and we’re grateful to the folks at the Smithsonian Folklife Festival for giving us the opportunity to learn more about this fascinating art form. It’s exciting to see our friends across the arts celebrate and preserve their own traditions—a kind of work that resonates deeply with our own values and mission here at ISC.
——
Stories in Motion is a regular feature in which ISC examines the fresh ways we see the power of storytelling at work in the world.