Sarah Brady never set out to become a storyteller. 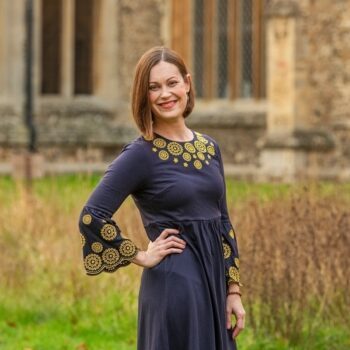 In fact, she resisted at first. But with a little guidance from Sheila Arnold, Donald Davis, and Syd Lieberman, she ultimately found her path.

Before she started a family, Brady was a university professor who specialized in theater and communications. But in 2009, when her husband was entering his fourth year of medical school and their first child was about to be born, she knew she needed to make a shift. There weren’t enough hours in the week to care for a newborn, teach, and get the PhD she would need to secure tenure.

But then, much like it happens in fairy tales, a fortuitous meeting occurred. Brady was approached by storyteller Sheila Arnold at their church, where Brady had performed the Book of Ruth, and the two became fast friends.

“She started telling me that I was a storyteller,” Brady recalls. But Brady didn’t see herself that way. She thought of herself as an actress, plus at the time she didn’t have any of the personal material that is so popular on the American storytelling scene.

It wasn’t until Brady took a workshop on biblical storytelling with Donald Davis in 2014 that she finally saw Arnold’s point. “That workshop shifted something in my thinking where I was like, okay. Maybe this might work,” she says. The feeling intensified after she saw Syd Lieberman tell one of his signature stories about the Civil War. The story brought her to tears because she finally saw a path for herself in the storytelling world as a lover of historical tales and historical fantasy.

At the National Storytelling Festival, where she’ll soon be featured as a New Voice, Brady plans to share a selection of King Arthur stories. She’ll also be performing a historical story called “White Rose,” about two young siblings who resisted the Nazis during World War II. It’s an intricate piece that weaves folk songs and fairy tales into the performance.

The idea for “White Rose” percolated for more than a decade before Brady really sat down to craft it. She and her husband, who is a pediatrician in the Air Force, had moved their family to England, where they lived for three years. With its proximity to the continent, the UK was the perfect place to research and develop the tale.

During her time abroad, Brady had the opportunity to sharpen her storytelling skills with some of England’s most prominent tellers, and even won the Cambridge Storytellers Liars Contest in 2019. “I presented the first version of ‘White Rose’ at a pub in Cambridge in March 2020, about a week before the world shut down,” she recalls. Soon after that, her family relocated to Virginia.

She’s thrilled to bring that story with her to Jonesborough, which she’ll be visiting for the very first time. Brady will be one of almost two dozen featured storytellers at the National Storytelling Festival, October 7–9, 2022. You can read our profiles of New Voices Brigid Reedy, Peter Chand, Ray Christian, and Jeff Doyle by following the links.